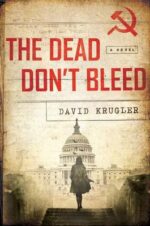 Washington D.C., 1945. Victory in the war looms, but a new fear transfixes the wartime capital. Fear of communist spies and the atomic secrets they covet. When the corpse of a Navy Intelligence officer is found on a cobblestone back alley, Lt. Voigt is called in to investigate. It s his first murder, but in the plot that he quickly begins unraveling, it won t be his last. Pursuing crosses and double-crosses, Voigt goes undercover and the fragments he discovers (a defecting German physicist, a top secret lab in New Mexico, and Uranium-235) suggest something far larger than the usual spy v. spy shenanigans. Soon enough he s in a race to identify the killer, to keep the bomb away from the Russians and to keep ahead of his own secrets